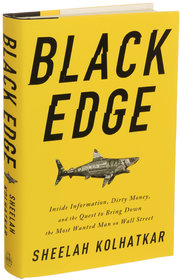 I just finished reading Black Edge, by Sheelah Kolhatkar and I give it a 4/5 star rating.

The book focuses on the hedge fund industry and insider trading, specifically at SAC Capital. SAC Capital started in the early 1990s by Steve Cohen and has enjoyed ~30% annual returns for more than a decade. Black Edge outlines some of the methods by which these massive returns were generated.


What exactly is Black Edge?

On Wall Street, traders are always seeking some type of edge. A great example of this can be read in this article from the Wall Street Journal a couple of years ago. Did you know you can subscribe to a service that will fly a helicopter over oil storage facilities to measure inventory levels with advanced cameras? These subscriptions can cost over $300,000 per year, but can be worth millions to traders.

This book also talks about ‘Expert Networks’ used by SAC to get access to company insiders. These networks allow individuals with expertise to tap into a network that will pay them handsomely for consulting. Investment management firms can use these experts to refine their models and assumptions. These conversations are supposed to avoid discussion non-public information. It’s a pretty good arrangement on its face but it opens the door for information to be shared that shouldn’t be. Those who might want to profit from knowing something big before anyone else can use these networks to their advantage.


The story is very well researched and written and provides a window into a secretive area of the market. Although I read it for entertainment, I still tried to learn something. My takeaway was yet another reminder that I have no business picking individual stocks and competing with folks like this. I’ll just stick with index funds for the bulk of my investing.
Posted by DIYMoneyBlog at 1:39 PM 2 comments:

It's that time of year again, where I get the invoice for my annual life insurance payment and re-evaluate our life insurance needs. This year is a little different than previous years because we also welcomed our fourth child into the family last month.


WHY HAVE LIFE INSURANCE?


To me, the purpose of having life insurance is to provide for my family in the event of my death. It is no coincidence that my policy payment occurs in the same month as my oldest child's birthday. Prior to having children, the only life insurance I had was whatever was offered free through my employer (4x salary plus $50,000). While that was certainly generous, as a newly married couple it was actually more than we probably needed. My wife had a good job, and either of our incomes was enough to support us both. When we found out we were expecting our firstborn, we knew that we wanted to have more coverage.

During my wife's pregnancy, we were saving 100% of her income and our plan was for her to be a stay-at-home parent. We wanted to have enough life insurance so that if something were to happen to me, she would be able to continue to stay home with our children at least until they finished high school. If something were to happen to her, the plan was (and is) for me to move closer to family, but still to have some life insurance to help cover childcare costs that we currently aren't incurring.

At the time, our household expenses were under $50,000/year and we settled on 20-year term life insurance policies of $500,000 for me and $250,000 on her. This, in addition to my employer provided plan felt like plenty of coverage. I have since moved on to a new employer but still have life insurance provided by the company equal to one year of my salary. It's worth pointing out too that the death benefit of life insurance policies is not taxed, so 100% of the benefit actually would be received as cash.


Each year when we pay our life insurance bills, we ask ourselves if we still feel that we have the right amount of coverage. So far, that answer has always been yes. As our family has grown, we've been able to keep our expenses pretty well contained and we've continued to save and grow our net worth.

Although much of our net worth is tied up in retirement accounts and home equity, if I were to die Mrs. DIY$ would sell the house and be able to access my retirement accounts without any penalties and would have a net worth over $1M. We are targeting to have more than $1M in net worth before we fully retire, but this would be plenty of cushion to allow her to sustain the household long enough to get all of the kids grown and then some. She hasn't been in the workplace since becoming a mom but looks forward to being able to re-enter the workforce at some point in life, so this would not be a burden if she weren't left with enough for an immediate lifetime retirement.


Life insurance salespeople will sometimes argue that buying term life insurance is throwing money away and that you should consider whole life insurance for the savings and investing benefits. To that my simple rule of thumb is this.

If you can remember that one simple rule, you'll avoid significantly overpaying for life insurance and also have more realistic expectations from your investment portfolio.

To the life insurance salesperson who says we're wasting money on term life, I'd add that we have 14 years left in our 20-year policy and my policy costs $365/year. I'll be thrilled if 20 years passes and I end up having flushed $1 a day down the toilet for that time, but my mind is at ease knowing my family would be taken care of should the awful happen.
Posted by DIYMoneyBlog at 5:29 PM 2 comments:

Email ThisBlogThis!Share to TwitterShare to FacebookShare to Pinterest
Labels: Investing

February has been a busy month in the DIY$ household. We welcomed a new baby into the family, had family visit from around the country, and even found time to take a trip to the beach with our newborn (it felt crazy, but turned out great). It was also a great month for us in the net worth department. As I alluded to in last month's update, we were expecting February to be a great month and it certainly did not disappoint. We ended the month with a net worth of $646,721, an increase of over $35k.


Our cash went up substantially, largely due to year-end bonuses that paid in February. We've been working on increasing our cash savings, and this helps us get closer to our new goal. We haven't fully decided how high we want the balance to get, but it's probably somewhere around $50,000 so long as the potential for a new vehicle purchase remains on the horizon. We also just had a baby and haven't seen all the bills, but we should be able to cover those expenses using our HSA which is included in the Investments category.


Our investments grew from good stock market performance as well as extra large 401k contributions with the accompanying company match from my year-end bonuses. The S&P 500 notched a 3.72% gain during the month and our largest holding is IVV, which is responsible for over $10k in gains. I added some very small speculative positions in NLY and MORL through my Robinhood account but this won't move the needle in either direction.

Nearly all of our investments are in no-load mutual funds or ETFs that our brokerage firm allows us to purchase with no trading fee. I do place occasional trades but have opted to use Robinhood for most transactions that otherwise would include a transaction fee. In early February, Schwab announced that they were lowering their trading cost from $8.95 to $6.95. This was definitely a win for consumers but the price seemed selected only to be able to say they were cheaper than Fidelity who has been offering trades for $7.95 for several years.

Over the weekend, I was poking around on the Fidelity website and noticed that they were no longer comparing themselves to Schwab, opting to only compare to companies that charged higher commissions like E*Trade and TD Ameritrade. It seemed a bit shady, so I called them out on Twitter and got the typical canned response.

Yesterday I noticed that Fidelity had lowered their trading cost to just $4.95. Not to be outdone so soon after gaining the lead in the race to the bottom Schwab quickly announced that they would be matching Fidelity at $4.95, temporarily calling a truce in the price war. I don't see myself trading more often just because trading commissions are lower, but $4.95 certainly feels a lot cheaper than $6.95 or $7.95 and should be a win for investors.


Sadly, this isn't going to be where I tell you that I hit 200k miles in my car. That update should be coming soon though since I just hit 199,000! While reading through Twitter it sounds like Corolla's are pretty popular in the FI community, and hearing other stories of immortal cars gives me confidence that mine will be able to make it to 250,000 miles or more. I did go to a used car lot that specializes in the type of car I'd like to replace my Corolla with, but only because I'm not normally in that area and I successfully avoided giving myself a case of car fever.


This month, we finally got our mortgage balance under $200k, woo-hoo! It was always part of the plan to throw a good chunk of my bonus at the mortgage and even though $199k is still a lot of money, it's a psychological boost to pass that threshold. This month my oldest was asking me if we could buy something like a 4-wheeler and I explained that I would love to have those types of toys, but not until we pay back the money we borrowed to buy our house. To help visualize what this meant, I created this chart that showed how far we've come and how far we have to go.

Each red square is $1,000 we have still to pay back. The green squares show how much equity we've paid off, including our original down payment. The yellow squares are market appreciation since we purchased.

My projection is that we'll have the house paid off before the oldest is 12 years old, which would be perfect timing to get a 4-wheeler.

Posted by DIYMoneyBlog at 5:09 PM 2 comments: