In Praise of Simple Entertainment

We recently had some houseguests and while getting to know each other the typical conversation topics emerged of what each of our families do for fun and the types of vacations we enjoy.

I think I gagged a little when, after some slight complaining about not earning/having enough money, the father told us how great of a deal they got by spending just over $5,000 to take their kids to Disney.

Don’t get me wrong, I don’t mind spending money on vacations (heck, we just got back from over a week in Europe!). But where I do have a problem is when people spend so much on vacation or other entertainment that it limits their ability to achieve any financial goals beyond keeping afloat, and when there is such an obvious contradiction between their words (“life is so hard”, “bills”) and actions (“I love Disney”).

On top of that, what ever happened to simple forms of entertainment? It seems like I am increasingly in the minority of not indulging in frequent costly entertainment for myself or my kids. If we don’t go to an amusement park every week of the summer (or at all), we’ll be fine. To a 5-year-old, playing in the backyard sprinkler is just as enjoyable as going to a waterpark.

Our lives are by no means devoid of entertainment, but we do try to keep our day-to-day lives simple. In no particular order, here are some of the simple things that we do for entertainment:

Last year we added a backyard playground and fence, and some of our kids are old enough to just send outside by themselves. They make great sidewalk chalk art, play ball, and climb all over a play set we recently got from a neighbor whose kids outgrew it.

I know several parents who feel the need to constantly take their kids to play at places that cost money like those indoor trampoline parks, amusement parks, or arcades. What I’ve learned is that if I take my kids places like that often, it’s no longer special and becomes harder for them to appreciate more simple forms of entertainment like playing at home. If they never have the opportunity to be bored and to practice using their imagination, paid entertainment can be something of a dependency, always looking for the next thing.

Our neighborhood HOA dues include access to a neighborhood pool, tennis courts, playgrounds, and more. Of course, we pay around $700 per year for this, but we have to pay that whether or not we use it. We aren’t there every day, but we get our money’s worth. Even if you don’t have a neighborhood with something similar, communities have parks, splash pads, and many other things that we all pay for in some way like through property taxes or rent.

Every so often, I’ll pick up a 500 piece jigsaw puzzle from the dollar store. When the weather outside  is gross and we need to stay inside, working on a puzzle as a family is a great way to spend time together.

While on vacation a few years ago, we brought home a small chess set for my son as a souvenir. He has really enjoyed playing with that small set, so on a more recent trip we brought him home a much nicer set. In addition to chess, we play a few different board and card games together (Phase 10 anyone?).

Most Saturday mornings, you can find me with some or all of my kids out for a a trip to the library. I’ve mentioned here before that I read a lot, and most of what I read I get from the library. So far, we’ve done pretty good at instilling a love of reading in our children. I’m sure it doesn’t hurt that I pay my son for every book he finishes, but I never have to force any of my kids to read. I’d probably post here more often if I read less, but that’s a topic for another day.

That’s just a few quick ideas that come to mind, and honestly this is how much of our free time is spent. It’s a mindset that has to consciously sought to not automatically associate entertainment with costly activities. If you have additional ideas, I’d love to hear them.
Posted by DIYMoneyBlog at 10:49 PM No comments:

Back from the declines of March, April saw our net worth snap back to $779,035. Here's how it broke down: 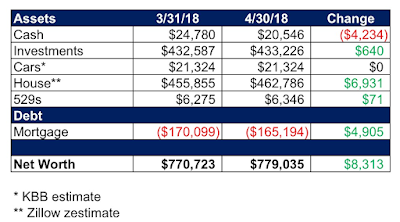 Our cash balance went down a bit in April partially from an extra big payment against our mortgage, and also some unexpected travel due to a death in the family. I consider time with family a priority and consider ourselves blessed that we don't have to decide attending family events and money.

In April, we had planned to make another large charitable donation but chose instead to put those funds towards our mortgage. Charitable giving is still a large part of our budget since we tithe 10% of our income to our church. Until our house is paid off, we have decided to defer other large donations that we have been making to our colleges. 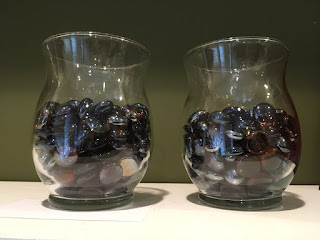 My mantra for our investments is "Stick to the Plan". It's not exciting, especially when I report out on it monthly, but the progress speaks for itself. We continue to add money from each paycheck and continue to be invested almost 100% in equities. Between market growth and our own contributions, we are up over $70k from the same time last year. Nearly all of our investments are tied up in retirement accounts, which will change once we have the house paid off.


Posted by DIYMoneyBlog at 12:11 PM No comments: