October is typically the busiest month of the year for me at work. The good news is I was too busy to even really worry or know much about what the stock market was doing. The even better news is when I did see the aftermath it didn't emotionally affect me or cause me to want to deviate from our plan. Our net worth declined by $25k to $836k. 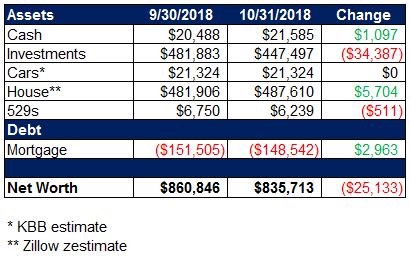 Our cash balance crept up yet again and is almost to the point where we'll quit adding to it and use any additional extra to go towards our mortgage. I also got a raise in October and we've already got a plan for the additional income to direct the extra money towards our goals instead of lifestyle inflation. We're now earning a whopping 2% on our savings so the monthly interest payments are actually noticeable.

October was a doozy in the investment department. We didn’t change anything with our allocations or contributions and managed to see our investment balance decline by nearly $35k. My first years' salary when I graduated college was only $35k so this is probably the biggest dollar amount we've ever lost in a single month. From a percentage loss perspective though, this wasn't nearly as bad as some of the losses we saw in 2008.

An interesting observation I've had over the years has been how my personal definition of a 'big' gain or loss has evolved. I still remember getting excited the first time I saw our accounts increase by over $100 in a single day. Now, we see swings over $1,000 pretty much every day. In October we even had one day where we 'lost' more than $10,000.

I love seeing our mortgage balance go down each month. With my new pay raise, we increased the amount we're paying towards the mortgage by $200, so we should see our balance go down by ~$3k each month. We are still on track to have the house paid off in 2021 and are exploring ways to make that happen even faster. If it weren't for our mortgage balance going down and our estimated home value going up, our paper losses for the month would have been much worse.

Because we're so focused on paying off the house, we haven't done many huge home projects in a while but have plans to redo our master bathroom and kitchen. Until the house is paid off though, I find it hard to justify these projects since the current bathroom and kitchen are perfectly adequate.
Posted by DIYMoneyBlog at 3:01 PM No comments:

In September, we reached another all-time-high net worth, growing another $7k to $860,846. 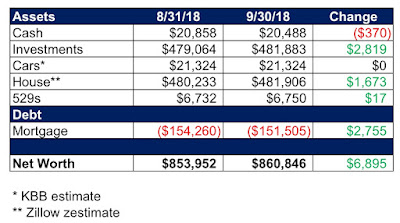 Our cash balance stayed pretty flat again as expected. Mrs DIY$ took a trip towards the end of the month leaving me home alone with all the kids for a weekend, but It ended up being a really inexpensive trip since we travel hacked her flight and the the rest of her trip cost about the same as it would have if she were home.

We’re still shooting to get this closer to $25k, but it will be a few more months before we’re there. I’m getting a raise in October and we’ll allocate some of it to build up savings.

Our investments went up, but not by much more than what we added during the month. I still haven’t switched to have more of the zero cost index funds but do plan to do so at some point.

One of the components in our investments category is our HSA. By the end of this year, we’ll have enough in our HSA to cover more than our annual out-of-pocket maximum, so are considering stopping additional contributions and shifting to even larger extra principal payments on our mortgage. My employer will still add to my HSA, but we just don’t think we need to since it is now large enough to cover any medical emergency we could have.

September was the last month before we are increase what we pay as our new normal mortgage payment. We’re so close to dropping below $150k, and while that’s still a lot it feels like an exciting milestone.

Not too long ago, our upstairs air conditioner went out and we had to get a new blower motor. Several hundred dollars later, we were back in business. Fast forward a few weeks when I was putting one of my kids to bed and noticed his bedroom floor was wet. He swore he hadn’t spilled anything, and just as I was about to call him out for lying I noticed that the ceiling was dripping. Oops.

I went into the attic and found that the air conditioner drip tray had filled up and was overflowing into the ceiling. I used the shop-vac to suck up all the water and threw out the insulation and tried to trouble shoot. I couldn’t figure it out, so we had the same company come out that had just fixed the unit to see if it was because they disconnected something and they determined that it was just a clogged drain. They didn’t charge us for fixing the clog, but it’s all fixed now and all we had to do was repaint the ceiling. Oh, the joys of homeownership.
Posted by DIYMoneyBlog at 9:16 PM No comments: