February was a great month for us financially. We got our taxes filed and refund received, and also received an annual bonus that was a bit larger than the previous year. Combine that with good stock market performance, and our net worth jumped up by over $45k to $903,975. This is the best monthly increase we’ve seen since we started trying monthly, and a close 2nd for highest income month ever. My first years salary after college was less than $40k and now we’ve made more than that in a single month. Compounding sure is a beautiful thing. 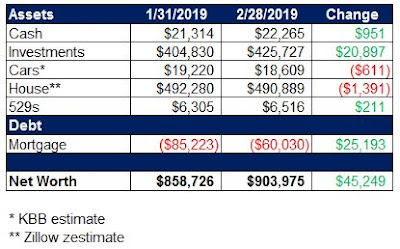 Thanks to an annual bonus and our tax refund coming quickly, we had a lot of cash come in the door this month. Rather than using this to boost our cash reserves we chose to keep our cash balance relatively flat to where it has been for a while now. It’s only up a little bit since we also had a trip to Paris planned for early March so needed some extra cash for parts of the trip that hadn’t already been paid for.

The S&P 500 earned nearly 3% in February. Add that to our larger than normal 401k contributions in February because of my annual bonus and our investment accounts grew by 5% for the month.

Also included in this total is our HSA account, which will be tapped in March for some withdrawals as we had one of our kids visit the ER in February and haven’t yet seen all the bills. Everyone is healthy now and the plan is to pay for the visit from funds in the HSA. We keep enough in the HSA to cover our annual out-of-pocket maximum, but will need to replenish the account for next year.

Nearly all of our cash flow went towards paying down our mortgage and we’re down to just $60k. We won’t be able to make any huge payments like that again this year, but we will be able to get very close to paying it off by the end of the year since we are paying down at least $3k per month in normal months. No major home repairs or projects in February, but I expect we will have a few as we get into spring. Our major (expensive) projects are on hold until the house is paid off, but that milestone is within sight.
Posted by DIYMoneyBlog at 11:08 AM No comments: