We continue to make progress towards 7-figure net worth, and in April we got a little bit closer. 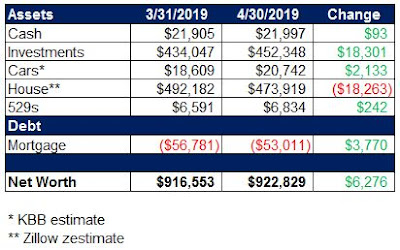 Every month we seem to have some out of the ordinary expenses, but do our best to spread them to future months as best we can. In April, that included a new kitchen mixer and small new TV. Even so, we were able to keep our cash balance relatively flat for the month. Our goal is to have $20-25k in cash until our house is paid off.

The S&P 500 was up nearly 4% for April and our investments moved in lockstep. We haven't changed our allocation or contribution amounts, but did finally get the hospital bills from February and paid them from the HSA account included in this bucket.
Now that Fidelity offers zero cost index funds with no minimum, we also started investment accounts for each of our kids using the money they had saved. Previously they had been saving in the 'bank of Dad', a spreadsheet I had been maintaining and paying them 1% monthly interest.
We got our kids a book to learn about investing called How to turn $100 into $1,000,000 and my oldest kid read it. Even though he seemed to understand the concept of compound interest, I wasn't quite sure he really got it until one day he came up and asked "Dad, can you show me how the companies that we own little pieces of are doing?" Naturally, it was a proud moment for me and shortly thereafter we helped him open his own investment account. I don't count the kids accounts in our balances here, but my son has a goal to get to $100 by the end of the summer.

I can see the light at the end of the tunnel.We are on track to have the house paid off in 10 more payments, and any additional money we get goes towards that goal. While we've been making extra payments, we're not going so extreme that we deprive ourselves, only forgoing things things we feel can wait. $1,000 trip to Paris? Count me in. $20,000 bathroom remodel? That’s going to have to wait (but definitely is going to happen). Since my raise kicked in for April paychecks, we increased the amount we paid towards our mortgage to not fall into much lifestyle creep. I get paid twice a month and we have been using one paycheck for our mortgage payment and the other paycheck for everything else. We have some travel plans coming up that might have us dial down our extra payments, but we’ll still be paying ~3x the minimum.
Posted by DIYMoneyBlog at 8:27 AM No comments:

America - We have a problem. And it’s sitting in our driveways

On a recent date with my wife, she commented that she is driving one of the oldest cars in the neighborhood. She didn’t say this from the perspective of wanting an upgrade, more of an observation about the affluence of the area that we live in (or at least the appearance of it).


At 12 years old and 150,000 miles, her Expedition has certainly been around a while, but “old” isn’t the first thing that pops into my mind when I look at it. What I think of is how great it is to have a reliable vehicle with no car payment.

A recent headline shared that the average car payment in the US is now $551 over 69 months. With average household income just over $60k/yr, that means many households have more than 10% of their entire income going towards a car payment. Many people don't even keep their cars for 69 months, resigning themselves to having a car payment as long as they live.

Over the past several years, we've been fortunate to see our net worth grow quite quickly. While a relatively high income has certainly helped, just as important has been the way in which we've controlled our expenses. Behind housing, transportation related expense is often the next largest, but by not having car payments our transportation related costs have been a fairly small percentage of total income.

I've seen some pretty crazy justifications for car loans, but nothing will convince me that it's a good idea for me. Like the friend who couldn't afford a new set of tires, so instead just traded in her vehicle for a brand new one since the monthly payment would be less than 4 new tires. Seriously.

Or how about my coworker who brings in more than $200k per year and complains about still having student loans 12 years after graduation. Might it have something to do with having 3 car loans, and a self-proclaimed inability to keep a car more than 50,000 miles? Hope you like the Mercedes, buddy.

Earlier in our financial journey (2006 and 2007), we borrowed $20k and $14k for vehicles. While we had car payments it seemed that we were only treading water financially, despite having a household income of around $100k. In 2008 we sold the more expensive of the two, opting to be a one car household, and payed off the remaining car in February of 2009. We haven't had a car payment in over 10 years, and in that time have purchased 3 cars, all with cash.

With that background, here are some of the top reasons I love living without a car payment:

1. Lower Monthly Recurring Expenses - seems obvious, but it's freeing to be able to keep more of each of my paychecks and to not be playing catch up for purchases already made. Your income is the fastest way to build wealth, if you're able to actually save/invest it.

2. Option to Pay for Collision Insurance - since no one has a lien on my vehicles, I can choose whether to pay for collision insurance (often a very expensive addition) or not. If I had a loan, I wouldn't have that choice. We keep collision on my Lexus since I drive it more often and I don't want to run the risk of using up our cash to replace it if something happened. My wife's vehicle is only driven ~5,000 miles per year and has a low replacement value, so we save several hundred dollars per year waiving collision insurance.

3. Unlimited Miles - Although my wife doesn't drive much, I drive around 20,000 miles per year. The typical car lease includes only 10,000 to 15,000 annual miles before they charge you more per mile. I have friends who rent cars for road trips since it ends up being cheaper than paying for extra miles on their lease. We used to do a lot of fairly long road trips, and never once had to think about whether we had enough miles.

4. Easier to Budget for Repairs - even though cars tend to be more reliable today than they were 20+ years ago, things still break every once in a while. If you're paying a car payment, it's sometimes difficult to have the extra expense beyond the car payment itself.

5. I'll Never be Upside Down - It's been reported that as many as 1/3 of new car purchases include a trade-in with negative equity rolled into the new purchase. With people not keeping their cars long enough to even get equity in their vehicle they are further committing themselves to having a car payment for their entire lives. If I don't have a car loan, I'll never have to worry whether I'm upside down.

Posted by DIYMoneyBlog at 9:48 PM No comments: