I’ve probably read several dozen books about the Great Financial Crisis, and just now got around to reading ‘The Sellout’ by Charlie Gasparino and really enjoyed the approach he took in telling the story.

If you were glued to CNBC for much of 2008-09 like I was (it was on all day in the lobby of my office so I could often hear it all day long whether I wanted to or not), you may recognize Charlie Gasparino. He is a reporter on CNBC often known for being the first to break major news, and was on TV a lot as the crisis unfolded given his deep connections throughout the finance industry.

A lot of other financial crisis books focus on the authors play-by-play point of view (like Hank Paulsen’s ‘On the Brink’), or that of a single company (check out ‘A Colossal Failure of Common Sense’ focusing on Lehman Brothers or 'House of Cards' for Bear Stearns). The Sellout takes a slightly different approach from any book I’ve read on the topic.

Given the authors' long tenure covering Wall Street, he already had relationships with a lot of the key players and knows them well. The CEO of Bear Stearns even reached out to him in the midst of the crisis. This unique perspective allowed the narrative in the book to start long before the crisis started and to tell the stories that lead to the CEO’s of the various firms rising to the helm of the different companies.

Personally, I think that some of the most interesting stories were those of Bear Stearns and Merrill Lynch and it was interesting to learn how interrelated they were. Since the story goes back so far, you get a good sense of how the decisions made as their last CEO's rose to the top contributed to their ultimate downfall. A key takeaway for me was that leverage is a two-edged sword, and company leaders ignore or underestimate that risk to their own peril.

If you really want to dive deep into the demise of a single company there are better books out there. This one is just right if you want to know just enough detail to know what happened leading up to and in the financial crisis and why it happened, in a style that is engaging and doesn't drag on.

Posted by DIYMoneyBlog at 9:50 PM No comments:

June 2019 was a great example of why you shouldn’t react to short term declines in the stock market. After having one of our personal worst months ever, we had one of our best months ever. In June, our Net worth grew by over $42k to $937,191. 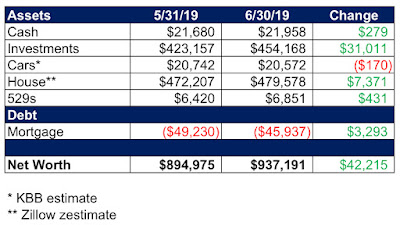 We spent half of the month of June either on vacation as a family or separated so I could work while the rest of the family continued to visit family. Our summer trips are fairly inexpensive as we usually stay with family. The one travel expense we haven’t been able to avoid paying a lot for is rental cars. Since our family requires 6 seatbelts, we’ve rented a lot of SUV’s and minivans (which always makes me thankful we don’t own a minivan).

In addition to some travel in June, we also put down a deposit on a cruise we are planning for next year with the kids after we pay off the house. With all that, we managed to keep our cash at about the same amount as the previous month.

Most retail investors don’t look at their investment balances very often, and usually look at just quarterly statements. If the quarter had ended after May when the stock market lost over 6% in a single month, I bet there would be a lot of calls from 401k customers to “get me into something better”. Not having a financial advisor to talk people out of making big emotional mistakes could mean that people sold out of the market after seeing May’s losses, and then missed out on June’s even larger gains of 6.89%.

HOUSE/MORTGAGE
As I expected, our home value continues to increase back to where Zillow had it just a few months ago. The really exciting thing about our house now is that we now have >90% equity in our home! The end is in sight, as we knocked another $3k off of our mortgage balance.


As I’ve mentioned before, this summer is going to be pretty expensive for us, so we may temporarily slow down on the mortgage payoff, but still should be able to pay it all off in the 1st quarter of 2020. Although most anything is on the table for sharing on this site, we still haven’t decided if we’ll share from other accounts with our real names when we pay off the house.
Posted by DIYMoneyBlog at 9:41 PM No comments:

Golden Handcuffs refer to financial circumstances that keep someone tied to a career or employer when they might otherwise prefer to move on. I’ve never had a lavish executive pay package, but have still faced a small version of this dilemma and have put a lot of thought into it. It is a form of privilege to even have to worry about it, but one that I think many will face when considering retirement (early or otherwise) or other types of career changes.

While I was pursuing an MBA, I was blessed to grow my career as a financial advisor to the point where my income was greater than that of the typical newly minted MBA ($100-120k/yr at the time). When I started my degree I was making considerably less than $100k and had my sights on a post MBA career change into corporate finance. In order to avoid student loans, I took five years to complete my degree, which in turn gave time for my income to grow to substantially over $100k.

As I approached the end of my degree, I was faced with a real dilemma. If I took a job like the ones I had wanted a few years earlier, I would have to take a pay cut of more than $50k/yr. If I chose to remain in my same job/career, the income would continue to be great but I would lose a critical opportunity point where it would make sense to pivot out of the financial services industry.

Ultimately, we did decide take a much lower paying job that has since given me opportunities and a career path that wouldn’t have been possible without making the change. My current income has also surpassed the higher paying job I left. Had we not made several deliberate decisions in our lifestyle and mindset though, the decision to leave would have been much more difficult and things may not have turned out the way they did.

As our income grew, we didn’t allow our lifestyle to also creep up.

A well-timed promotion blessed me with a near doubling of my income potential right at the time when my wife began staying home with our firstborn. While a great opportunity, the guaranteed portion of my pay actually slightly decreased. From day one, we made the decision to treat any of the additional variable income as a bonus and to use it to strengthen our base. Once we had a comfortable cash reserve, we began regularly making 4x or 5x our normal minimum mortgage payment such that by the time I graduated and quit my job, we were within 6 months of paying off that house.

I took a pay cut because I was changing to a different career field, but had I wanted to leave and stay in the same industry I’m sure I would have been able to make similar income at another company. My golden handcuffs were mostly in my head...since I had never made that much money before it was hard to fathom being able to replicate it elsewhere.

Over the years, what I have learned is that switching companies can be quite lucrative and if they want you bad enough, they may even make you whole for whatever you have to leave on the table to join. I’ve seen several 6-figure cash signing bonuses, and often see folks who join a company externally do so at a higher level of pay, position, or both than if they had grown their career to that same point internally.

I recently got placed into a bonus pool where I will receive company stock grants each year that vest over multiple years. Unlike 401k match money that becomes 100% mine after I reached a specific tenure with the company, each stock grant I receive has it’s own time to vest before it will actually be ‘mine’. To prevent this from becoming golden handcuffs, we’re treating this like a bonus and will only include the vested portion in our net worth calculations. This will help to not ‘anchor’ myself on a number that at some point may become large enough to cloud my judgment.

Don’t get me wrong, I’m planning to stick with my current employer for a while, but it will be because each day I get to do work that I enjoy, with people I enjoy being around, that stimulates my mind, and that is part of a larger mission that aligns with my values. Oh, and the pay is nice too.
Posted by DIYMoneyBlog at 6:39 AM No comments:

I recently finished reading “Q&A” by Vikas Swarup and enjoyed it enough to mention it here. This book was the inspiration for the movie ‘Slumdog Millionaire’. Although I’ve never seen the movie, I generally find that books are better than their movie adaptations.

If you aren’t familiar with the book or the movie, the premise behind the story is that a young man in India is arrested after winning an award show ‘Who Wants to Win a Billion?” on suspicion of cheating. The show producers can’t imagine how it is possible that a poor waiter from a poor neighborhood could have known the answers to the questions they asked him, and the book narrates the life stories where he coincidentally learned the minutiae necessary to answer the questions they asked. The format was also engaging since each of the 12 questions are accompanied by a short story that is standalone, yet integrated to the rest of the story.

Whenever I read stories like this, I’m also reminded of the stark differences between the life experience of living in a developed country vs developing countries. I have spent some time living outside the US in third world countries, but haven’t yet been to Asia. This time has shaped my worldview to some degree and it helps me to recognize my privilege. If you haven’t had and don’t plan on having the opportunity to live abroad, reading stories like this can help give you a glimpse into the lives that so many millions live as their reality throughout the world (minus the winning a billion rupees part).
Posted by DIYMoneyBlog at 9:13 AM No comments: