January was a fairly unremarkable month for the DIY$ household financials, but we did manage to have our net worth creep up by $2,811 to $1,019,162. Read on to see how things all shook out. 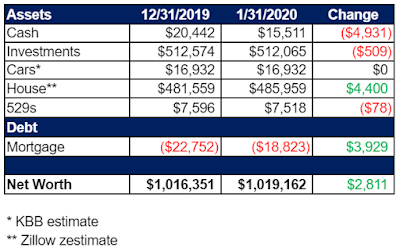 The only somewhat concerning change in January was our cash balance dropping below $20k. I'm not super concerned since I'm getting a bonus in February that will fill it back up, and this is only because we had to make final payments towards a vacation we have planned for later in the year with the kids.

I love seeing our mortgage go down, and dropping below $20k is a fun milestone. I get paid twice a month and for several years now we have basically been using one paycheck to live on, and throwing the other paycheck entirely towards the mortgage. We are on track to have the mortgage fully paid off in February and I'm not sure what it will feel like to have an entire paycheck each month not be automatically spoken for.

In other news, I had to make a trip to India in January for work. It was my first time to that part of the world and I really enjoyed my time there. The long flights and time away from family weren't fun but did help me complete 10 books in the month of January, starting the year well ahead of my standard goal of 52 books per year.

The best books I read last month were:

Shoe Dog by Phil Knight. This is the story of Nike as told by the founder. It's a fascinating story, and one thing that really blew me away how many times the company teetered on the edge of insolvency despite massive annual sales growth.

Talking to Strangers by Malcolm Gladwell. I've read every book Malcolm Gladwell has published and this one was a different topic from his other books but was still the same well crafted narrative style I enjoy. Among other things it talks about the snap judgments we make interpreting body language of strangers and how to identify internal unconscious bias, something we'd all do well to root out.
Posted by DIYMoneyBlog at 10:36 PM