March was a doozy for our Net Worth, like it was for pretty much anyone else I know. It was also our first month of not having a mortgage payment though, and I was repeatedly surprised at how many times I found myself comforted during the market downturn because we had no mortgage. We ended the month with our net worth down nearly $67k, ending at $961,700.

Having a >$1M Net Worth was nice, but just like our lives didn't change when our net worth went over $1M, nothing has changed now that it's back under $1M. Eventually the market will find a bottom, stabilize, and begin to recover. Meanwhile, we'll be dollar cost averaging into the market with each paycheck, so it's only a matter of time before we are back over $1M. 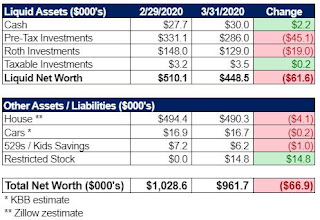 Now with the house paid off, our next financial goal is to get our liquid net worth up to $1M. We've got a long way to go, but this new view for our household balance sheet breaks up our assets slightly differently to help me better see how we're tracking towards that goal. Here's a run-down of the different areas:

Our cash balance crept up this month since we didn't have a mortgage payment to make, and would have gone up more but we started a long awaited bathroom remodel and spent about $3k on some of the new materials. This total includes our checking and savings accounts, minus our credit card balance that we pay in full each month.

We should see our cash balance go up again in April as we're now expecting a refund for a cruise we paid for that we were going to go on in April, and like much of America we're holding off on large purchases (other than the bathroom remodel) until we have more information on the economic implications of COVID-19. I also have had my pay cut by a significant percentage for the foreseeable future, but will still be able to save money as we've been living on much less than the remainder of my income.

This category includes all of our traditional IRA's and the pre-tax portion of our 401k's. Each year we convert funds from pre-tax to Roth, but not enough to actually bring down the balance of these accounts after earnings. These accounts are invested exclusively in broad based index funds.

Our Roth Investments include each of our Roth IRA's and the Roth portion of my 401k. Typically I hold funds in our Roth accounts with higher long-term expected returns than the holdings in our pre-tax accounts to take advantage of the tax-free nature of the account. This means that in our Roth accounts we lean a little more towards international equities, hold absolutely zero bonds, and have done the occasional options trade or individual stock (I currently hold Amazon stock in my Roth IRA).

My 401k contributions are currently going in as Roth, and new contributions are invested the same way for the Roth or Pre-tax funds. I don't quite max out my contributions, but with employer match will contribute over $20k/yr in total. Even though our cash flow would allow us to max out my 401k, I am choosing not to in order to build assets that are accessible before age 59 1/2.

The past several years we have been focused on paying off the house and only investing enough to get the company match in my 401k and haven't really invested outside of retirement accounts. We would like to be able to retire early so we'll need investments outside of our retirement accounts, which get penalized for withdrawals before age 59 1/2.

We have a long term investment account where we are investing in index funds, and another account designated as my trading account where I trade individual stocks. I'd like to be able to trade more actively, but my job doesn't allow me much time during the day to keep track of markets.

My job gives me restricted stock grants that I am including in our total net worth, but excluding from liquid net worth until they vest. Since I don't have plans to leave the company any time soon, I'm assuming that I'll be there long enough for the shares to vest. Upon vesting, my plan is to immediately sell since I don't believe in holding too much stock in the company I work for. I have seen far too many cases where people were heavily invested in their employer stock and it didn't end well.

We started these accounts a few years back but decided put a hold on contributions after only a year or two to focus on paying off the house quicker. To make up for lost time, we've now starting adding back to these accounts 3x what we were doing before. We received very minimal financial support from our parents in college and want to provide more for our kids than we got, but don't plan on fully funding their educations. We're still ~10 years away from needing to worry about this, so aren't too concerned about saving the amounts we're planning to provide.

As I mentioned earlier, this month we started the demolition of our master bathroom and the associated remodel. We've basically gutted the bathroom down to the studs, but have decided to not do some of the bigger floor plan changes we originally envisioned that would have involved a lot more plumbing and framing changes. We're doing pretty much all the work ourselves and only have 1-2 days a week that we can actually dedicate to the project, so it may be a few months before everything is all put back together.

The value of our cars doesn't seem to change much anymore, since they are old enough to where they will mostly hold their value as long as we take care of them. I had to get a new battery for my car this month, but other than that we haven't been driving much and are lucky that our auto insurance company is giving us a 'shelter-in-place' rebate since so many fewer people have been on the roads recently and accidents are way down.

So there you have it. Our net worth grow over $1M, we paid off our mortgage, and then saw our net worth drop back below $1M all in the span of just a few months. Paying off the house truly has given me such a different attitude in the midst of all of this uncertainty. Our investments lost more in March than the total value of all of our investments in 2008, and I haven't lost a wink of sleep over it.

Posted by DIYMoneyBlog at 10:20 PM