Coming off the heels of a strong month in April, we reached another new all-time high net worth in May, up almost $37k to $1.05M. 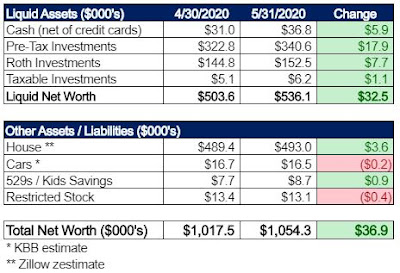 We finally got the cash refunded from our cruise that was cancelled back in March. This was the primary reason our cash balance went up by almost $6k. Our bathroom remodel expenses were much lower in May than in April, but we still spent $1,700 on some new tools and hiring out some of the trickiest plumbing parts.
We typically hate hiring work out when doing home improvement projects but there are times when we know our limits and ran into one of those situations with the plumbing. We've now reached the point where tile is going down so soon it will start to look like a bathroom again.
Our cash cushion is feeling much more comfortable now. It should be more than 6 months of expenses, but we haven't had a month since paying off the mortgage where we haven't had large 'one-time' expenses so it still feels possibly a bit lighter than we'd like.

The S&P returned 4.5% in May, and our investments performed similarly since we are primarily invested in US Stock Index funds.
We continue to add a bit each month to non-retirement investment accounts, but mentally those accounts still feel as 'untouchable' as our retirement accounts even though I know we could technically get at the money penalty free at any time. We are now up to over $6k in those accounts and since we have no immediate spending goal for that money, it is invested in index funds.
With the house paid off and already having crossed $1M in net worth, the next medium-term goal is to get our 'liquid net worth' above $1M. The timing of this obviously depends on a lot of variables like the market and my income/bonus, but I suspect we'll get there around 2026.

Our 'Other Assets' remain unchanged other than that we are adding to our kids college savings accounts each month. There are a few large purchases of what I'll call 'toys' that we have been waiting on until the house was paid off that when we finally bite the bullet and buy them, I don't plan to include in our net worth.
We do include our primary vehicles in our net worth, if we were to buy something like a boat, RV, or ATV I would just show a big drop in cash with no corresponding asset. Nothing like this is imminent, but I wouldn't be surprised if we did buy something 'fun' in the next year or two.
Posted by DIYMoneyBlog at 1:14 PM

Email ThisBlogThis!Share to TwitterShare to FacebookShare to Pinterest
Labels: Index funds, Net Worth