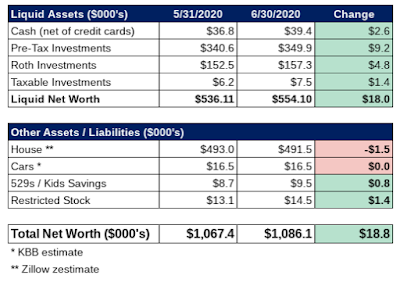 Despite having my pay cut due to the COVID-19 pandemic, we've still been able to add to our cash balance and are looking to get this over $40k in the near future. My job still has a lot of uncertainty and while things are becoming clearer, we aren't likely making any large purchases until we are more comfortable that my position is secure longer term (which also hopefully coincides with my pay cut being rolled back).

Our investments continue to perform with the market and nothing really has changed here. I'm considering doing some additional Roth IRA conversions this year if we do have excess cash but again that's something that would require some more clarity on our financial outlook before we do it.
It is nice to see our non-retirement investment accounts growing now too. While this could be considered an extension of our emergency fund, our intent is that these investments have a time horizon of 5 years or longer before we would use them. Anything else we plan to spend in the next 5 years we can cover through our normal cash flow.

Housing in our area continues to sell quickly and we have noticed a few people taking advantage of low interest rates to upgrade their home. I hope for them that it doesn't come back and bite them, but I am loving living mortgage free and haven't even considered going back into debt.
We've been adding to our 529 accounts as well and will likely continue at this pace for the foreseeable future as we do plan to fund some (but not all) of our kids education using a combination of 529 accounts, cash flow, and non-retirement investment accounts. It's important to have a healthy amount set aside beforehand since we could have up to 3 kids in college at a time.
Posted by DIYMoneyBlog at 1:09 PM No comments:

Email ThisBlogThis!Share to TwitterShare to FacebookShare to Pinterest
Labels: Net Worth

So apparently I read 8 books in the month of June. Some were pretty quick reads, but I really didn't think I had read so much in the month. That puts my at 47 books finished so far this year, purposefully slower than last years' pace. Here are the books I read, ranked from best to worst.

This one was the best book I read this month and really gave me a lot to think about. In it, the author weaves a lot of different life experiences around the theme of being authentic to our true selves, with a great analogy about a cheetah born and raised in captivity catching glimpses of its true nature.

2. Sharing the Work: What My Family and Career Taught Me about Breaking Through - Myra Strober

Myra Strober is a professor at Stanford, who helped pave the way for women in academia. This book follows her story and the challenges she faced starting her career in the 1970s when women were expected to be secretaries or lecturers, but not tenure-track faculty. A lot of progress has been made, but sometimes it's good to read things like this to help see how far we've come. I think it's something that's also important to men to read, especially those who may make hiring decisions.

This is the first in a series of books following the Ballantyne siblings, who in 1860 traveled to southern Africa to try and reunite with their missing father. Much of the book also focuses on the slave trade and if nothing else, this book should be read to see some of the horrors associated with the trade the often will get glossed over or ignored when discussing slavery. This was a really long book and I liked it, but it ends with enough closure that I'm unsure whether I'll continue the series or not.

In December 1994, Orange County, California declared bankruptcy. This book was a quick read about what happened and how to prevent something similar from happening again in the future. Perhaps the greatest lesson learned for me is something that also applies to personal finance and that is:

"Don't Invest in Anything You Don't Understand"

Follow that one piece of advice and you won't avoid losses, but you will likely avoid financial catastrophe. In the case of Orange County, it was complex derivatives like interest rate swaps. In my experience, I've seen people go broke trading options, levered ETF's, and inverse ETF's. The one common thread in all stories is that they couldn't clearly articulate how the risks associated with their investments.

We have followed this account on Instagram for years where Brandon Stanton goes around NYC taking pictures of total strangers and interviewing them for a brief caption. The book is really just a compilation of Instagram posts and captions, but is also a way to support the author. It was fun and in some cases interesting, but also it pleases me to know that we're at a point in our lives financially where we can afford to buy books where the content is already available elsewhere for free but we still buy it to support the author.

I really enjoyed 'The Divide' by Matt Taibbi so wanted to read more of his stuff. This one though ranks pretty low in terms of books about the financial crisis, banking system, etc. Seemingly every paragraph uses hyperbolic adjectives to illustrate his disdain for the financial establishment and individuals involved (there's a whole chapter about Alan Greenspan called 'The Greatest A**hole in the Universe'). Even though I agree with a lot of the conclusions drawn by connecting the dots, there are better books out there.
If you want to read a snippet from the book, check out the author's article about Goldman Sachs in Rolling Stone magazine

This book follows two characters through the start of the internet era who end up in a battle over a valuable domain name. One was the successful creator of the dating site Match.com who owned several other site, and the other a shady character who allegedly store a domain name the first guy owned but wasn't using. This was back when things like domain names weren't recognized as having as much value as they do today, but quickly became a major lawsuit when the stolen site began making millions.
If you're looking for a good read about shady characters on the internet, I would recommend American Kingpin, the story of the founder of the Silk Road, the largest website in the world for illegal activity until the founder was caught and jailed.

Most everything on my shelf was recommended to me by someone at some point, but for the life of me I couldn't recall where this recommendation came from. The author is a great thinker and there were a few parts in this book that definitely gave me pause and made me think about the decisions I make with regards to food choice and sourcing. Overall though, this was a pretty difficult read that mixed philosophy with economics into a long essay about food production. Interesting, but really wasn't my sort of book.
Posted by DIYMoneyBlog at 10:46 PM No comments: